RailEnable wishes to propose Aylesbury Interchange as a station stop on the High Speed 2 railway line.

A major issue with HS2 is its lack of accessibility on the north side of London.

The diagrammatic map below illustrates our proposal for Aylesbury Interchange (AI) as a station stop on the High Speed 2 (HS2) railway line.

One of the objectives of HS2 is to rebalance the economy. The current plan might however be regarded as London-centric. A station at Aylesbury Interchange (AI) would provide access to HS2 on the north side of London by car and rail from London, the South East, Southern England, the West Country and South Wales. Aylesbury Interchange (AI) would therefore facilitate business travel from a large catchment area to towns and cities in northern England and Scotland. AI supports the proposed Northern Powerhouse and strengthens the prospects of commercial success for HS2.

A third role for Aylesbury Interchange (AI) would be to provide a railway station for rail-based journeys to London Heathrow Airport. Proposals by High Speed Two Ltd originally included a connecting line from HS2 to Heathrow. We propose that the role of this line would change to also facilitate local rail journeys to Heathrow. Aylesbury Interchange (AI) with this connecting line from AI to Heathrow would improve the rail-connectedness of Heathrow (note 1).

Aylesbury Interchange (AI) would be designed as both a rail interchange station and as a parkway station. In both of these roles, AI would provide access to domestic High Speed rail (HS2), to continental rail services (HS1) and to Heathrow, in the latter case also contributing to a reduction in congestion on the M25 motorway.

To the extent that it is wise to establish a strategy for a rail network capable of withstanding a substantial increase in ridership - for example, as a result of any significant modal shift from car to rail - AI is envisaged as a key element in the realisation of such a strategy in the London area. AI therefore dovetails in with the vision for High Speed rail and provides a key feeder to the High Speed rail network. AI is designed as a major transport hub offering a wide range of connections.

AI is designed in conjunction with an express railway line westwards linking to the existing line to Swindon and South Wales, with connections from it to Reading, Oxford and Banbury. We are proposing this express line and propose that it is known as the Swindon express link, as illustrated earlier.

The Swindon express link provides access to the High Speed rail network both to the North and to Europe. This link line offers the potential for express services direct from South Wales (note 2).

Crossrail is a project to provide east-west rail services by means of a tunnel beneath central London. It is not yet in operation.

We anticipate that Crossrail and possibly also Underground services would be brought out to AI, although Crossrail services to AI would necessitate a change in service patterns from those currently envisaged for Crossrail.

An HS2 station at Old Oak Common is currently planned as the HS2 station in London or vicinity prior to the terminus at London Euston.

AI was originally designed as an alternative for the station proposed at Old Oak Common.

One of the objectives of HS2 is to rebalance the economy. The current plan might however be regarded as London-centric. A station at AI would provide access to HS2 on the north side of London by car and rail from London, the South East, Southern England, the West Country and South Wales. AI would therefore facilitate business travel from a large catchment area to towns and cities in northern England and Scotland. We suggest that AI is a superior proposal to the proposed station at Old Oak Common and also better supports the objectives of HS2.

Concerning travel into London, there are reasonable prospects for passengers alighting from HS2 services at AI to be able to obtain seats on Crossrail services to London and on services to Heathrow, whereas services at Old Oak Common both to London and to Heathrow would be subject to crowding. Given that HS2 is envisaged as offering a premium-value service, an interchange at Aylesbury offers a compatible customer experience, whereas an interchange at Old Oak Common does not. AI offers better prospects for the commercial success of HS2 than does a station at Old Oak Common.

Old Oak Common station is under construction, to be served by trains on HS2 to Euston. The design is illustrated below. Incorporated are station stops added to nearby London Overground lines : Old Oak Common Lane on the North London line and Hythe Road on the West London line. London commuters on the Great Western Main Line suffer an additional station stop. 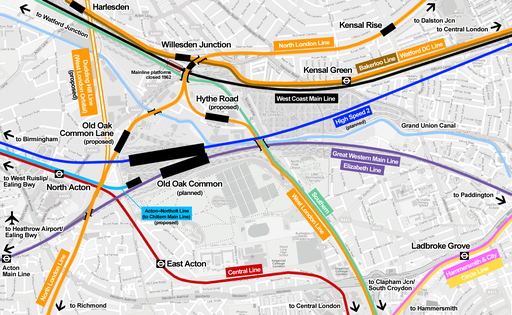 Source : Wikimedia. Click the map for an enlarged version.

It is natural to consider an HS2 to HS1 link via St Pancras International.

Services from HS2 to HS1 would call at St Pancras, whether continental services or an extension of domestic High Speed services via HS1 to Medway towns.

Trains from HS2 to HS1 would not call at Old Oak Common.

We will now turn our attention to the question of the location of AI in relation to Aylesbury.

Locating AI at the point that HS2 crosses the existing railway line from Princes Risborough to Aylesbury and with some modest investment enables the roles listed above to be fulfilled.

The following diagrammatic map illustrates the rail network if AI were to be located between Princes Risborough and Aylesbury.

Some investments in the rail network are necessary, in addition to the HS2 line. The primary investment is the provision of a new express line linking to the line to Swindon and South Wales, with connections from it to Reading, to Oxford and to the Chilterns line direct to Banbury. Referred to earlier, we are proposing this express line and propose that it is known as the Swindon express link.

The current line from Princes Risborough to Aylesbury is single track. It would be re-engineered and replaced if necessary to become a dual track line i.e. permitting trains in either direction at the same time. If replaced, there would hopefully still be a service to the existing intermediary stations.

A connection enabling Aylesbury to be bypassed on the southern side of the town would enable services e.g. from Watford via the Croxley Rail Link or Metropolitan Line Extension (currently in abeyance) to Rickmansworth to run to AI without changing direction at Aylesbury. AI can operate with or without this Aylesbury bypass.

The line from Maidenhead to Bourne End, currently single track, might potentially be upgraded to restore the former dual track working and with restoration of the former line to High Wycombe. We might also envisage a connection for services on the Great Western Main Line from Reading. AI could operate without these (note 5).

We hope to have shown that the investments needed in the rail network to provide the facilities of AI - not necessarily all of the above - are modest rather than substantial.

Aylesbury Interchange located to the north west of Aylesbury

An alternative possible location for AI is to the north west of Aylesbury. This also would maximise the potential of the conventional rail network in this area. Link roads would need to be determined.

Locating AI at this point and with some modest investment enables the previously-listed roles to be fulfilled.

The following diagrammatic map illustrates the rail network if AI were to be located to the north west of Aylesbury.

Once again, some investments in the rail network are necessary, in addition to the HS2 line. The primary investment is the provision of a new express line linking to the line to Swindon and South Wales, with connections from it to Reading, to Oxford and to Princes Risborough. Referred to earlier, we are proposing this express line and propose that it is known as the Swindon express link.

It is possible that the Swindon express link would make use of the former Ashendon link. This ran more or less parallel to the existing line from Princes Risborough to Aylesbury on an alignment further to the north west (note 6).

What rail services might we envisage at Aylesbury Interchange?

In no particular order, we list here some possible services at AI.

A Crossrail service providing access to Central London from AI.

Services to Birmingham, the North and Scotland via HS2.

Luton Airport and services via the Midland Main Line - further information on this below.

Stansted Airport - further information on this below. Change at Stevenage for East Coast Main Line services.

Express service to Paddington - from South Wales or West Country.

Stopping service to Paddington via Didcot and Reading.

Milton Keynes and services via the West Coast Main Line.

There would be two pass-through lines for non-stop services. HS2 is currently under construction and it is likely AI would connect to HS2 by means of spurs.

An exercise for the reader would be to estimate the number of platforms at AI.

Aylesbury Interchange as a transport hub

AI is designed to offer a wide range of connections including to London, the South East, Southern England, the West Country, South Wales, Heathrow and routes via HS2 and HS1. AI is a major and strategic transport hub.

Inevitably, AI as a major transport hub will give rise to a perspective as regards other aspects of the rail network. As the centre of a star network, we suggest AI would reasonably offer connections to airports including Heathrow, Gatwick, Luton, Stansted and Southampton. With a wide range of airport connections, some direct services between airports via AI may be provided during times of disruption.

Access to the WCML is via Milton Keynes, making use of the Bicester to Bletchley line currently under construction.

1. This proposal for a line from AI to Heathrow potentially offers better value for money than the proposed Heathrow Western Access from Reading to Heathrow. Direct services from South Wales or the West Country via AI to Heathrow would seem to be a possibility.

2. We understand the existing line via Swindon to Bristol Parkway and South Wales is used by limited-speed freight services, an issue that would need to be resolved.

3. The Swindon express link necessitates upgrades to existing rail infrastructure. Passengers interchanging between HS2 and the West Country and South Wales would make use of services via Swindon. Use of the existing chord between Tilehurst and Reading West would enable services to additional destinations : we believe this chord is not currently in use for passenger services.

The line from AI to Paddington/Crossrail joins the Great Western Main Line at Old Oak Common West Junction. This junction would require upgrading. It is located in the vicinity of Oak Common station currently under construction.

5. Services from the West Country and from South Wales via Swindon currently run via Reading to Paddington. The new route via AI to Paddington might be used by selected services, others remaining on the route via Reading. At least some services from the West Country via Swindon might be routed via Reading to AI and then return home without continuing to Central London at all, operating in an anti-clockwise direction only via Reading and AI. This offers the potential to reduce congestion at Paddington. In place of such a circular route, such services might simply terminate at AI.

Concerning Heathrow, the Heathrow Southern Access proposal may include a stopping service from Heathrow to Reading via Virginia Water. Perhaps this could be extended past Didcot to AI and Heathrow, to become a circular service.

6. The Ashendon link was located north of the village of Ashendon and south of Wotton Underwood and Grendon Underwood.


This is a RailEnable proposal.